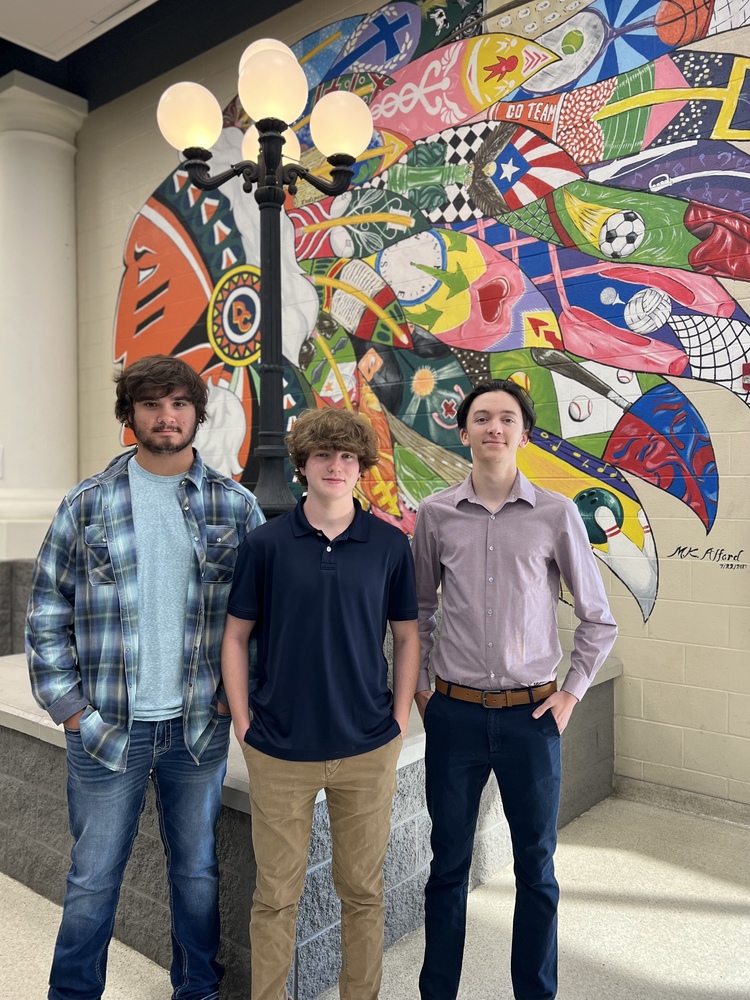 Recently, Dyer County High School seniors Elijah Dawson, Landon Liddell, and Brayden Rouse were announced as Commended Students in the 2023 National Merit Scholarship Program. A Letter of Commendation from the school and National Merit Scholarship Corporation, which conducts the program, will be presented by the school’s principal to the students.

Roughly 34,000 Commended Students throughout the nation are being recognized for the exceptional academic promise. Although they will not continue in the 2023 competition for National Merit Scholarship awards, Commended Students placed among the top 50,000 students who entered the 2023 competition by taking the 2021 Preliminary SAT/National Merit Scholarship Qualifying Test.

Dawson, who is a dual enrollment student at both DCHS and Dyersburg State Community College, has maintained a 3.9 GPA in high school and has an ACT composite score of 33. At DCHS, Dawson is a member of the National Honor Society, HOSA Club, FBLA Club, part of the Tennessee Gifted Education Program, and a varsity starter on the Choctaw soccer team, serving as Captain from 2020 onward.

Since June, Elijah has served as a quality assurance sorter at NSK. His goal is to obtain a Master’s in Industrial Engineering. By high school graduation, Dawson will have completed a total of 7 AP/ dual enrollment classes.

Liddell has maintained a 4.0 GPA while at DCHS and is in the top ten percent of his class. He is a member of the Math Club, National Honor Society, the Gifted Program, and on the DCHS ACT Wall of Honor/Elite Club. Landon is a four-year member of the Varsity Cross Country team, qualifying for state his freshman and sophomore years, as well as the Choctaw soccer team, being named Defensive Player of the Year his junior season. This year, Liddell joined the Leo Club, became a member of the FBLA Club, voted Most Likely to Succeed, received the Autumn March and ALS Scholarship and began an internship at ERMCO.

Rouse is in the top ten of his class and has received several ‘All-A’ awards. He also attended 2022 Governor’s School for Emerging Technology Alumni. Brayden is a member of FCCLA, SHAPE Club, Math Club, the Gifted Program, Varsity Soccer, and the 4-H Trap Team. He is the 2020 AIM Grand National Handicap Champion and Tennessee All-State Trap Team Captain. He has also taken part in python programming, penetration testing, and computer networking courses. For two years, Brayden has worked as a supervisor at Mutty Pawz Pet Resort. He has volunteered within the community at local soup kitchens, 4-H fundraisers, and Jake Day.

Dyer County Schools Director Cheryl Mathis stated, "We are incredibly proud of Elijah, Landon and Brayden! Being named a National Merit Commended Student is an honor that is not easily achieved. They have worked hard during their academic studies, and it is has helped them to reach this status. These young men have a very promising future, and we look forward to seeing what great things they do!"

“Those being named Commended Students have demonstrated outstanding potential for academic success,” commented a spokesperson for NMSC. “These students represent a valuable national resource; recognizing their accomplishments, as well as the key role their schools play in their academic development, is vital to the advancement of educational excellence in our nation. We hope that this recognition will help broaden their educational opportunities and encourage them as they continue their pursuit of academic success.”